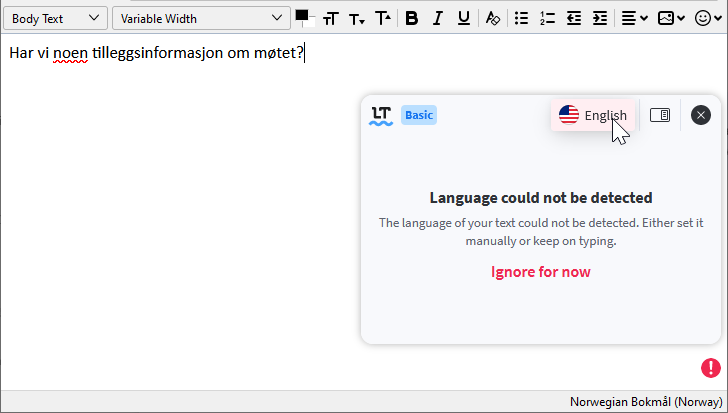 If you keep typing, does the problem disappear? For this text (“Har vi noen tilleggsinformasjon om møtet?”), the problem is that it’s detected as Swedish.

It switches to Norwegian correctly if I write more text, thank you. It does not work when I am replying to some emails, since the email header is in English.

Isn’t there a way to manually switch the language when using Thunderbird? The plugin says “Either set it manually or keep on typing.”, but I cannot change it.

Isn’t there a way to manually switch the language when using Thunderbird?

There was a technical reason this isn’t possible. I don’t remember the details, but I’ll ask our developer later this week.

Thank you for your support!

FYI, the selection of the language is done via a drop-down selection, and for some reason, this doesn’t work in Thunderbird. It’s on our to-do list, but currently not very high…