Hi,
As much as I love LT, one thing that drives me nuts is that I cannot configure Picky Mode. While I overall like it, it keeps triggering some rules that do not align with my personal style. Most notably, the Oxford English spelling of organisation with “z”. Another one would be the formality of tone. It keeps flagging repeatedly and while I can disable it for “the current text”, I cannot disable it for good.

Overall, it would be educational and overall just great, if one could view (and possibly extend) the picky mode rules for any given language. So if the settings could have an option to view and enable/disable the Picky rules, that’d be swell!

Thanks for your feedback. You can turn on/off picky mode globally in the settings:

Thanks, @dnaber, that I was aware of.

What I was hoping for, is to have a “Configure” option next to that toggle, that allows me to to see the specific rules per selected language and toggle them each. That way I can disable the Oxford comma, and spelling, etc.

Hope that clarifies.
Thanks!

@dnaber, just wanted to check back if my request above is something that you and the LanguageTool team are considering?

If you don’t like a certain correction or suggestion to appear again every time you can just click Disable this rule everywhere or, if not available, Add “(word)” to personal dictionary. Then ensure you selected the right language on the drop-down menu on the LanguageTool corrector.

Thanks, @Luca.
I guess my setup then has some problems because I’ve had to turn off the Oxford spelling with “z” multiple times already on the same device. It doesn’t seem to stick globally.

Thanks, @Luca, but I do not see that option anywhere: 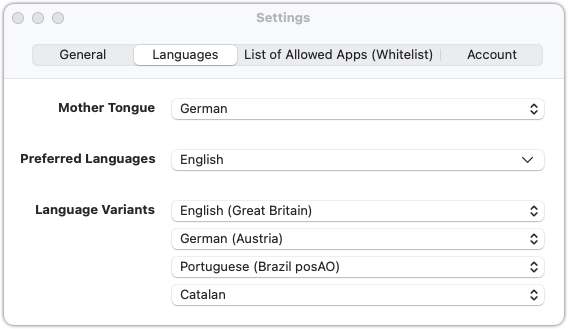 Yes, I see, but looks like you already set it as I said, it’s simply that I have a different “layout”, I’m using LanguageTool Firefox extension. Interpret English as: is that entry that I highlighted. 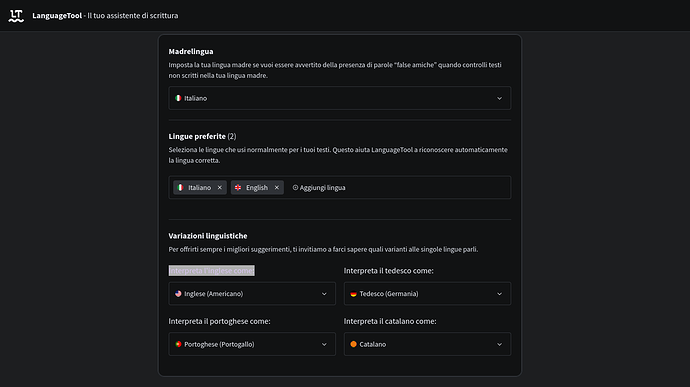 Indeed, the layout is different, but the options are the same. While the suggestions don’t appear consistently right now, but words like “organise” seem to be the ones in question.

I also found an article here explaining that Oxford English actually uses -ize instead of -ise, but that seems to be a style choice in BE with BBC, etc. on one side and UN and certain publications on the other…

In the end, as a user, my initial feature request stands:
Can you allow users to configure the specific rules in Picky Mode one-by-one to allow support for one’s personal style? As I do like the picky mode, just don’t like some rules.

Yes, I could see this -ise and -ize thing, probably beyond disabling for the current text these are the ways to achieve it:

disable Picky Mode, despite it’s critical as will also disable all other picky rules

add every flagged word to the personal dictionary

select Interlanguage, should be a kind of smart language switch so you won’t need to change language manually

disable the check manually by adding the domain on LanguageTool settings
The third one is surely the most suitable, assuming that does what you like.

So now I caught the tool in the act: 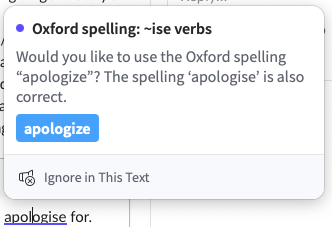 As you can see, the only option I have, is to ignore the given word in a given text and not turn it off across all texts.

To your suggestions, I don’t think any of them really work, and here is why:

Overall, the only resolution I see—understanding that it’ll take time to be put in place—but that solves this and increases flexibility, is allowing users to toggle picky rules, or ideally even add and configure them oneself. I don’t mind doing that in a well-documented XML file even.

That way, a user can truly define their own style.

Yes, I knew these weren’t much recommended or acceptable for a smart usage. Let’s discard them.

Select Interlanguage → I do not know where I can do this

It’s on LanguageTool settings, on your favorite languages choices. Try adding Interlanguage as new choice to your own already set and check if your words are still detected.

There you just have to add the main link where excluding LanguageTool detection. So from the beginning of the link till .com/.it/.net/whateveritis, you copy the link till them and paste on the domain exclusion. It’s not like having to check and edit complex code or algorithms

Hi @Luca, thanks for the tip on Interlingua, I found it. Have to say that it was not a very obvious option. Probably should be a separate option to select, rather than in the list of languages.

Fair enough, disabling .com, .org, or even .google.com is an option, but then it disables all.

So yeah, I’d still hope that you’d allow for a way to configure things even through a text editor.

it was not a very obvious option. Probably should be a separate option to select

. As it’s not a language as others it should be at the beginning and have a separator under it before listing all other languages.

disabling .com, .org, or even .google.com is an option, but then it disables all

Not necessary to disable everything, you can simply copy the link of the websites you often use where the problem occur and paste them all as exception.

LanguageTool is on GitHub so if you register there you can submit new ideas or report bugs.