Dear Community. I have been using the LanguageTool Firefox extension for a while, and I am very happy with it.
I now discovered the LibreOffice extension and installed it successfully. The problem I have is that when I want to “Check text” the dialogue box squeezes all the contents which makes it impossible to use. See screenshot below: 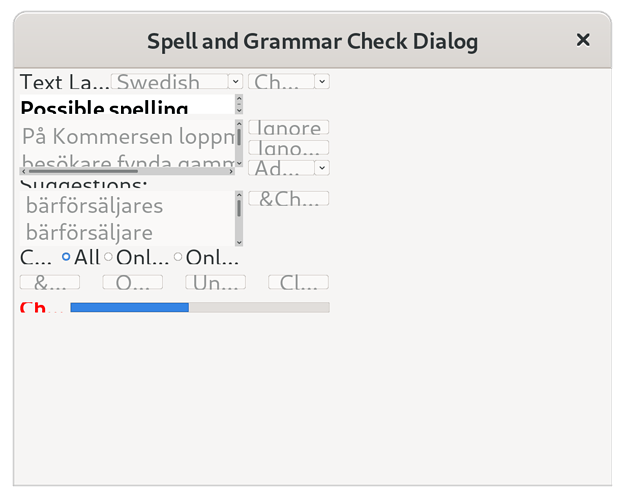 It is quite conceivable that the display errors shown above are due to the GTK theme and fonts used. I am using LibreOffice under Manjaro Xfce with the distribution’s default settings, and for me the Spell and Grammar Check Dialog is displayed as follows. 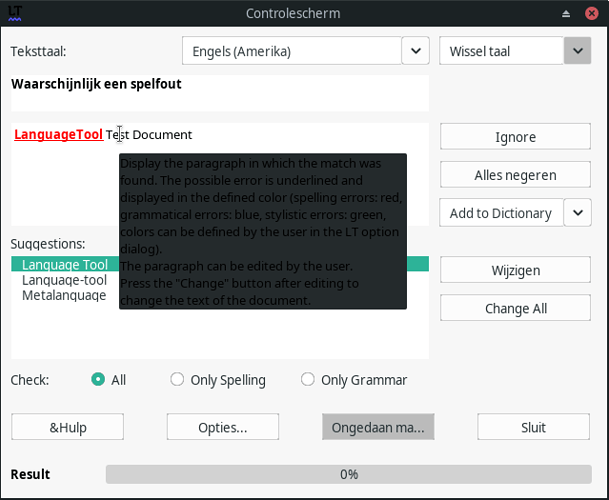 As can be seen from the screenshot, the dialog box is displayed without errors, at least as far as I can tell. Only the pop-up windows that appear when you move the mouse pointer over the individual elements of the dialog box are difficult to read.

Ok, thank you for your answe @Piscatorius. So I would have to experiment with my GTK settings or change desktop environment to Xfce to get a better rendering?
Best

Well, first of all it would of course be desirable to know what the LanguageTool developers have to say about the display errors. With Debian and GNOME, you are using a common distribution and desktop environment. And the GTK theme and font you are using should be Adwaita and Cantarell, am I right? So nothing out of the ordinary. With that, the display of the LanguageTool extension should actually work without errors.

However, I know from experience that the GTK theme used, and often enough the font and font size used, can greatly affect the rendering of some programs. For example, I used the Ubuntu Budgie distribution for quite some time, which comes with a bunch of different GTK themes and associated fonts to choose from. They all looked very inviting at first glance. However, when rendering LibreOffice and the LanguageTool extension, errors occurred with many of them. Sometimes it was due to errors in the GTK theme itself, sometimes it was simply due to a font that was too large or incorrectly chosen. So before you change the entire desktop environment, I would try a different font and/or font size. If that doesn’t help, you can try a different GTK theme combined with a different font and/or font size.

Ok, thank you I will look into this. I have never changed GTK settings before. But I will try to play around with it a bit and see if I get an acceptable rendering.
Best